U18 FIBA European Championship 2019 was held in Volos, the capital of Magnesia district in Greece. U18 Spain NT take the championship title, after they beat U18 Turkey NT in the final game with result 57:53.

Our national team started championship with routine victory over Germany with result 75:68. In the next game in the group, U18 Serbia noted first defeat against U18 Great Britain (85:87) even we controlled almost the whole match. in the last attack we had a 3pt shot for win, and then from the offensive rebound we had opportunity to score 2 pt for over time. This defeat was a warning and an indication that there are low level teams on the tournament and that we need to play game all 40 minutes. In the last group stage match, Serbia beat Turkey (76-67), so on we take the first place in group A.

The opponent in the 1/8 final was the U18 Lithuania NT, which finished the group stage as last team in the group B. We played a good games in the group, where we mostly controlled our opponents and dictated the game, against Lithuania we were not able to play as we wanted. We opened the match well, with a 10: 2 series and we simply stopped there. From that moment until the end of the third quarter, Lithuania completely took control over the match. We went on the half time with -9. We started second half very deconcentrated and completely out of the game and in 10 minutes in the third quarter we scored only 2 points. Last quarter, on the scoreboard was +19 for Lithuania. And then in the last section our team start to shine. Stong and high defence resulted with easy points from the transition as well as good position attacks that we managed to realize. We came to -2, one minute before the end of the game. However, the team did not have enough strength and concentration in the final minute to take the final win.

It was remaining the battle from 9th to 16th place and the next opponent was U18 Finland NT. Which we quite easily and convincingly won by 82:62. Then we again defeated U18 Germany with result 76:74, slightly harder than in the first game on the championship. There is one more game remaining, the fight for the ninth position against the U18 Italia national team in which Serbia again played a bad third quarter after which we could no longer return to the game. The Italians controlled the last section and won U18 Serbia in the end with result 81:72.

The final standings of U18 Serbia at this year’s European Championships is 10th place. 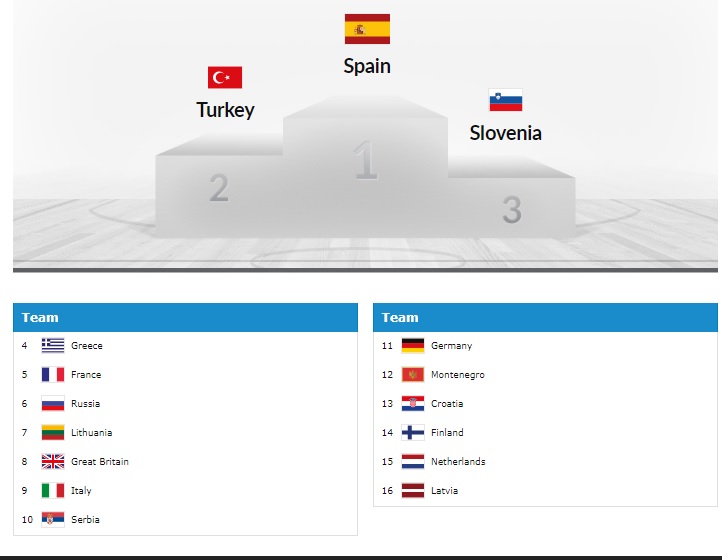 Certainly the best player in the Serbian national team and one of the biggest prospect on the tournament. He played very mature and with a great dose of confidence during the championship. However, because of fatigue his left knee could no longer withstand, so he played against Germany only 6 minutes in the game and in the last game for 9th to 12th place against Italy Aleksej missed the match.

In the first two games of the group Pokusevski achieved double-double score, which was recommended Aleksej for team leader. He was useful in both, in the attack as well in defense phases. He defended well 1 vs 1, against lower growth players. He have long arms and the progress of leg work is obvious which leaves too little space for attackers in outside positions to maneuver in 1 on 1 play. He showed that he had an incredibly good blocking timing, as evidenced by the fact that he averaged 4 blocks per game. He closed the rim and he was often initiating the transition game after defensive rebounds (6.2 per game). Elite body with good mobility and good technique allowed him to be the player who will pass the ball faster to the opponent’s court half and start a positional or complete transition attack after defensive rebounds. And when we add a good shot from distance as well as a 1 vs 1 game, we can conclude that he has a wide range of options in the offence, which he showed in this championship.

Last weekend we attanded U17 Hopes in Valjevo. This tournament in Valjevo built strong reputation during the past years.... read more