New NCAA basketball season is right around the corner and Serbia will be again country with the highest number of players in NCAA in whole Europe and fourth in the whole world right behind Canada, Australia and Nigeria. In the upcoming season, there are going to be 34 Serbian native players in D1 and 33 in D2. We decided to go through the list and write something about the most interesting freshman, about those players who are ready ready for their breakout seasons and about those who could stand out and be positive surprises of this season. 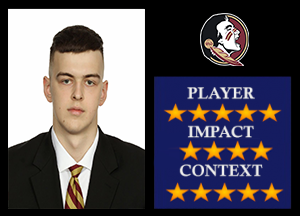 Balša Koprivica
C | FR. | Florida State
Koprivica is one of the most talented European freshmens in NCAA. He is already 7 years in USA. He spent last two high school season in one of the best high school programs – Montverde Academy. He won GEICO High School National Championship in 2018, and in 2019 they made it to semifinal where they fell to IMG Academy. At 7-1, Koprivica has a tremendous skill-set for his size. He can score with his back to the basket, but he also has ability to step out and hit mid-range shots, as well as put the ball on the floor. He is also very mobile for his size, good finisher around the rim and a solid passer from the post. He is gold medal winner with Serbia at 2017 FIBA  U18 European Championships. He had many scholarship offers but he selected Florida State over Gonzaga, Miami, Florida, Tennessee, Virginia Tech, Wake Forest, Clemson, Southern California and Baylor. 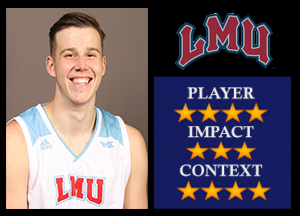 Lazar Nekić
PF | FR. | LMU
Nekić is 7-0 tall forward who can cover both inside position. Moves very fluidly, can control the body well and has potential to become good defender in the paint thanks to his size and length. He came to USA in 2016 from KK Zemun and first two seasons of high school spent playing at San Gabriel Academy, then he moved to Tri-City Christian School from where he graduated. He decided to accept offer from LMU where he going to play under coach Mike Dunlap. LMU is well known program that likes to give chance to international players and they probably expect big things from Nekic in future. 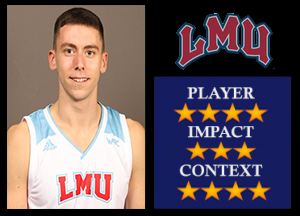 Lazar Živanović
G/F | FR. | LMU
First year for Lazar in USA. He spent last 4 years playing for Crvena Zvezda with which he had many success in Serbian competition but in ANGT as well. He was also a member of U16 and U17 NT of Serbia with which he won bronze medal at U16 FIBA European Championship in 2017. Živanović is 6-7 tall guard/forward who is freakishly athletic. Last years shoot was the main problem in his game, but it’s going to be interesting to see how he is going to adapt on NCAA basketball considering that 3PT line is closer and what role Mike Dunlap is going to have for him in his freshmen season especially taking in consideration his potential to play defense. 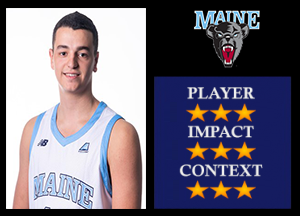 Veljko Radaković
PF/C | FR. | Maine
Another player who came to USA from Crvena Zvezda, but unlike Živanović he spent one season at Lee Academy first then he follows the footsteps of several current Black Bears that have made their way from Lee Academy to Orono. Radaković is 6-9  long skilled big man who can stretch the floor with his shooting and passing, has excellent footwork and passing skills in the post, and has experience playing at a very high level in Serbia. Last season Maine was the program with the most international players in their roster, and this year that’s again going to be a case as they have 12 international players in roster. Beside Radaković, Nedeljko Prijović is another Serb in the team and we also have Serbian representative in their coaching staff in Igor Vrzina. We definitely can expect that Radaković become face of program in the next years. 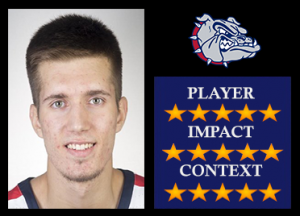 Filip Petrušev
PF/C | SO. | Gonzaga
Petrušev is one of the best prospects in Europe in 2000 generation. He had great summer with Serbian NT at U19 World Championship where he avereged 19.3 points, 10.1 rebounds and 2 blocks. Excelled at prep powerhouse Montverde Academy in Florida where he helped them to win another national championship as a senior. In his freshmen season at Gonzaga he appeared in 32 games for the Zags, averaging 6.5 points per games in only 11.4 minutes. Even though Gonzaga roster is loaded with talented international players on his position such as Pavel Zakharov, Oumar Ballo and Killian Tillie it’s expected that Petrušev has breakout season considering that Zakharov and Ballo are freshmans and most minutes on inside position should split Tillie and him. It’s still unknown is Petrušev going to declared for NBA Draft 2020 or he is going to wait one more year. 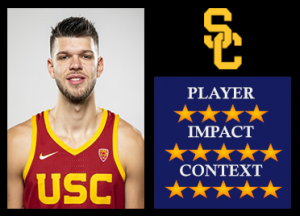 Nick Rakočević
PF/C | SR. | USC
Nick was born in Chicago. He has Serbian roots by his father, Momo and he was a part of Serbia NT at U20 European Championship 2017. Rakočević played for Saint Joseph’s High in Westchester, where he averaged 19.8 points, 14.4 rebounds and 4.0 blocks. This is going to be his senior season at USC. Last season Rakočević averaged 14.7 points and 9.3 rebounds while playing in all 33 games, making 30 starts. He ranked among the Pac-12’s top 10 in six categories: scoring (10th), rebounds (3rd, 308), FG% (8th, 54.8 percent), blocks (5th, 47), offensive rebounds (1st, 109) and defensive rebounds (3rd, 199).  He is a 6-11, 225-pound versatile big who runs the floor great for his size. Mobile, well-coordinated with excellent footwork. This season will determine his chance in the NBA and if he repeat or have even better season then last one, we may easily see him on Draft board . 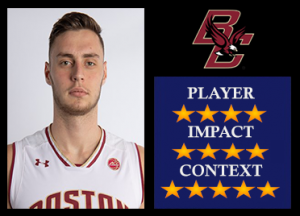 Nikola Popović
C | SR. | Boston College
Popović is a former Crvena Zvezda player. After four years in Crvena Zvezda he went to Sagemont Prep School where he was in first Team All-County selection by the Sun-Sentinel after averaging 8.0 points, 7.0 rebounds and 3.0 blocks per game as a senior. Last season he started 24 of the 28 games which he appeared where he averaged 14.5 points and 7.2 rebounds. Was one of six ACC players to rank among the top 20 in scoring and rebounding and top 10 in FG%. Mobile and quick 6’11, 253-pounds big guy with decent frame and good lateral quickness. Great offensive rebounder, creates a lot of second chance opportunities for his team. Good distributor from the low post. He doesn’t shoots very offten but has range from the 3pt line. 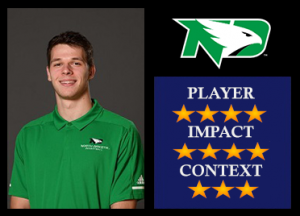 Filip Rebrača
PF/C | SO. | North Dakota
Filip is a son of former NBA player and Serbia basketball legend Željko Rebrača. Maybe he doesen’t have a size like his father but he definetely inherited athleticism. Filip is 6’9 high level athlete with great run and jump ability.  Mobile athletic power forward with long arms, great footwork and base. Good timing as a shot blocker and gets off the ground quickly. He worked a lot on his jumpshot this summer and he is capable to strech a floor as a PF. In his freshman season he averaged 8.0 points and 5.9 rebounds and showed flashes of his potential in some games like vs Idaho with 19 pts, 8 reb. This season he should have even more minutes on the floor then last season because he is more experienced and North Dakota doesn’t have such a quality inside players so this could be his season. 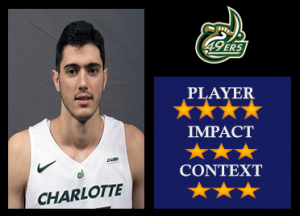 Luka Vasić
G | SO. | Charlotte
Vasić was born in Pirot, where he played until he didn’t left to US. He led BC Pirot in U19 Roda JLS in 2016, when he was named MVP of the league averaging 25.6 points, 8.4 rebounds and 3.4 assists. After that he went to Avon Old Farms high school where as a senior, he earned second-team All-New England honors after averaging 15.3 points, 5.8 rebounds, 1.7 steals and 1.6 assists per game. In his freshman season at Charlotte he played 24 games with nine start averaging 3.8 points and 2.6 rebounds. Unfortunately he had to redshirted last season after tearing the ACL in his right knee, but he recovered well from injury, he improved his strength, he is more experienced and this season he should have more playing time so we will see how he is going to use it. 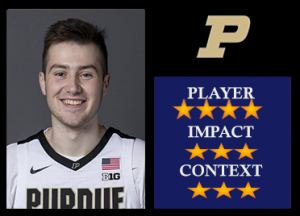 Sasha Stefanović
G | SO. | Purdue
Stefanović was born in USA in Crown Point, Indiana. He had very successful high school career at Crown Point High School. Was a Supreme 15 All-State honoree, as well as AP third-team All-State, the Post-Tribune and Northwest Indiana Times Player of the Year, the conference MVP and team MVP. He became Crown Point’s all-time leading scorer (1,385 points) this past season. He is 6’4 skilled and crafty guard with great offensive game. A pure shooter. Very good in catch and shoot situations and also in creating his own shoot. In his freshman season at Purdue Stefanović appeared in all 36 games, averaging 2.5 points, 1.1 rebounds and 0.4 assists per game and shooting 25-of-61 (.410) from 3-point range, the fourth-best 3-point percentage by a freshman in Purdue history. In his sophomore season he should definitely get more playing time and maybe be one of the positive surprises. 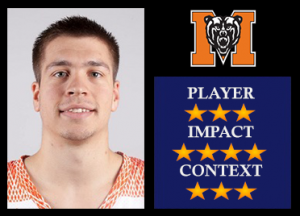 Đorđe Dimitrijević
PG | SR. | Mercer
Started in Zdravlje Leskovac, where he was one of the best players in Serbian youth leagues. Played first two years of college for Western Nebraska Community College and then transferred to Mercer. Over a two-year period, he started 60 of 63 games, was a career 89% free throw shooter, shot 48.3% from the field and 44.7% from three point range. He is 6-2 tall highly efficient and consistent scorer with great ball handling ability. He adapted well in Mercer program where he had very solid junior season where he averaged 9.6 points per game & shot 43.2 percent from the field in 23 minutes per game. In his senior season at Mercer it’s expected to have starter role and to be floor general for Mercer. 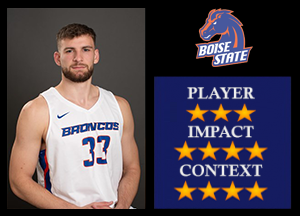 Mladen Armuš
PF/C | JR. | Boise State
Armuš transferred this year from East Tennessee to Boise State. He spent his freshmen and sophomore season at ETSU. Before that he had one year in high school at Southwest Christian Academy. In freshmen season at ESTU he averaged 6.3 points and 5.3 rebounds per game and was selected in All-SoCon Freshman Team by the league’s coaches. In sophomore season his numbers have grown 8.0 points, 7.7 rebounds and 1.0 blocks  in only 24 minutes per game. Reason to transfer to Boise State is probably more playing time room and bigger role and it’s expected to be a starter for them this season. He will bring great size and strength to the roster and he will provide more depth and length to the Broncos’s inside game. Mladen also have bronze medal in the U17 World Championship in Dubai with Serbia NT.

U19 JLS is a league that revealed many talented players and was starting point in their big careers. Players such... read more

Last weekend Junior ABA League was played. We had chance to see top prospects from all region competing against each... read more

Last weekend, leading clubs from the region competed in the qualifying stage for the final U19 ABA tournament for... read more 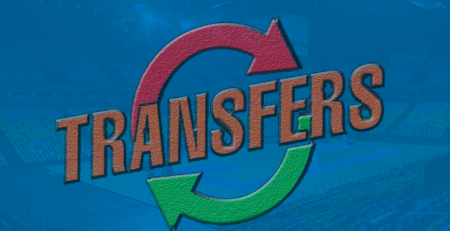 New U19 Roda JLS season is ahead of us. Best teams from U19 category in Serbia will take a part... read more

Take a look a weekly retrospective of U20 Serbian players from all competitions around the world that had notable performances... read more

The new "Sportlight On" section on the SerbiaHoop site deals with scouting and analysis of the most current and most... read more

Ognjen Micovic was born on March 10th, 2000 in Cacak, where he made his first basketball steps. Whan he was... read more