The new “Sportlight On” section on the SerbiaHoop site deals with scouting and analysis of the most current and most interesting young players from Serbia. One of them these days is certainly Aleksej Pokusevski, who is expecting the NBA Draft in 5 days, where he will make a huge step towards the best league in the world.

When we talk about a player who is 214 cm tall, you probably imagine an old school center whose back to basket game is the pinnacle of the attacking arsenal, but Pokuševski is an outside player who does literally everything on the court. Needless to say, the NBA scout’s attention is drawn to an eighteen-year-old player with such basketball and physical predispositions.

It is interesting that Pokuševski stands out above all for his great court vision, the former Olympiacos player is able to play absolutely all positions. Starting from the P&R game where he equally well to roll screener and the players on the weak side. His height allows him a far better court view than other outside players, so we will often see how and when he is well guarded he manages to find a open teammate.

The shot is also a segment of the game that Pokuševski can be proud of, especially for a player of his height. Since he plays a lot with the ball in his hands, he takes most of the shots from dribbling, both for two and for three, but he is still more precise from the spot-up situations. As he is a very intelligent player, he moves quite well without the ball, he is not static and solidly fills the space, while his cuts are accurate and timely.

He uses penetrations only as a third option, if he can’t shot or pass. It is very striking that he avoids contact play, which can make him look for forced solutions and thus put himself into a counter rhythm.
Every kind of his back-to-back game against outside players is a miss-match situation at the start, which in most cases he solves with a fade-away shot and thus already avoids the mentioned contact game.

We should not spend too many words on his game in transition, we will quote the presentation of the Denver Nuggets “He is 214 cm tall, and he can run like a gazelle”. This is exactly what Pokuševski looks like in transition, he quickly conquers space with long strides, long arms enable him to finish the transition on the rim without major problems, but not at any cost, if he estimates that there is no clear finish, he does not hesitate to split the pass.

Aleksej has a huge defensive potential, but for now we can only talk about the potential.
The one-on-one defense is solid, it has advantages in long hands, but the team does not always manage to cover the lack of strength. He defends outside players quite well, the work of his legs is solid, and in case the player “escapes”, his physical predispositions allow him to easily reach him at the rim. The situation is already different with the players in the center positions, and there is a lack of muscles and strength, especially if he keeps strong big guys.
The defense against the ball is at a slightly higher level, a good reading of the game allows him to steal the ball, as well as timely help from the weak side, which often ends with the block. The problem occurs, as in the defense on the ball, when he needs to position himself in front of the center and not allow him to receive the ball near the basket, weak legs  and narrow hips are the main cause of the problem and he will definitely have to work on it.

You have to take into account that the whole analysis was done on the basis of appearances in the ANGT Euroleague as well as the Greek A2 League. Of course, that is not a problem because he is a player who is only eighteen years old, but in some segments of the game, especially defensive, he lags behind serious senior basketball. He will solve most of the shortcomings by upgrading his body, which currently cannot meet the conditions of the NBA league.

That the teams are aware of his huge potential is best shown by the predictions that he will be drafted in late first round in a very high-quality draft. Boston, Denver, Dallas and Philadelphia stand out as the most serious candidates who could pick him.
It is no secret that American analysts compare him with Kristaps Porzingins, as well as that they have already given him the nickname “Serbian unicorn”.
Extremely high basketball IQ in combination with extraordinary physical predispositions and a “soft” hand certainly give us the right to expect an enviable NBA career from Pokuševski. 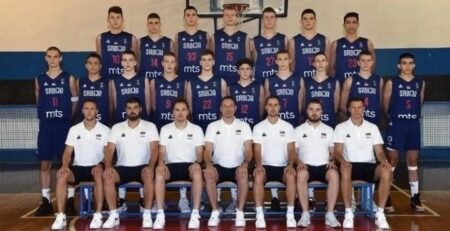