Unfortunately, there is an ever-increasing impact of the system that came from USA, where only one type of ball is given to children from early ages and specialize in only one particular sport, and this phenomenon is increasingly common. Pre-ambitious parents who have failed to achieve a certain sport impose the same on their children, so that they can cure their failure through them. And then to make sure that their child has all the necessary conditions and that he is on the right path to achieving the goal (the question is whose goal) they pay for individual trainings with which children begin with 10,11,12 years, and the fundamental stages of training are often ignored by coaches, who focus on winning rather than gaining basic skills and physical preparation. Here we come to the early specialization.

Too early sports specialization is based on the wrongly interpreted fact that it takes 10000 hours (3h x 365d x 10g) of devoted exercise to achieve mastery in sports. Young athletes must take great care of the principle of gradualness, gradually increasing the load, both the volume and the intensity. Maximali results are achieved later in the training stage that is most favorable for this. 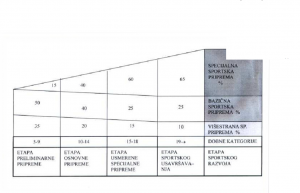 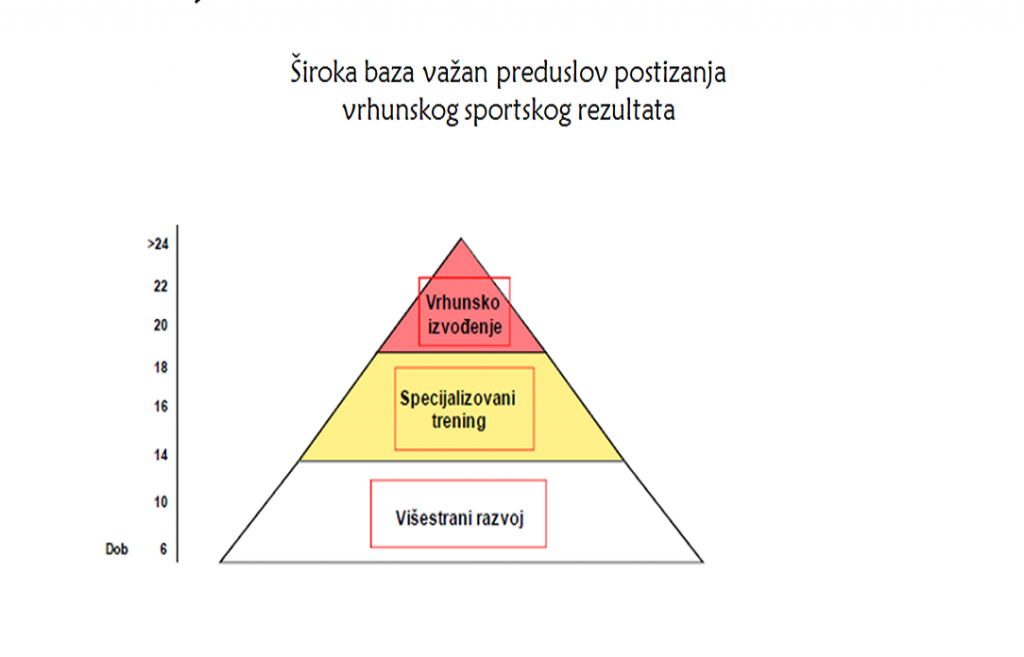 Large studies have been made on this problem that lasted for 14 years. A large group of children aged 9-12 years was divided into two groups:

– The first group was in the early specialization program (USA system)

-Other has worked according to the general program, in which children participated in various sports and activities and all physical training in addition to the specific development of skills and abilities.

The results showed the following: 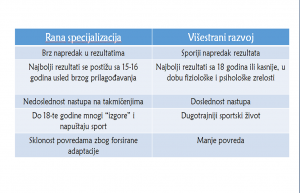 Canadian Istvan Balyi and his associates made a long-term development program for athletes Long-Term Athlete Development – LTAD. It is an idea that has been developed on the basis of a scientific research consensus using the knowledge of trainers around the world and it defines a complex developmental path from a child to an adult in a simple and flexible way. 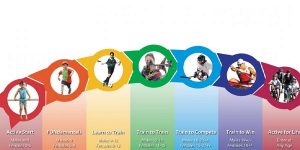 Goal: Learning basic movements and connecting them to the game

Goal: To learn all natural forms of movement for the purpose of later development of motor skills (techniques)

Goak:Learning basic sports techniques, including the main sport (the skills learned in the previous period should be put into the context of sports)

Goal: Further development of physical preparation with the improvement of specific motoring and demand of sports

Recent research and evidence from practice indicate that early selection:

So the earlier specialization will very likely bring some results, but in the earlier period and at a lower level, it does not guarantee the achievement of top-level sports results at senior level. Most senior seniors have dealt with at least one sport next to the main.

Therefore, parents, do not orient your child and focus only on one sport. Lead them to try as many sports as they are young, later they will decide for themselves what they like most. Who knows, maybe your child is talented and gifted for handball, swimming, some martial arts or athletics, and you do not even know it

Unfortunately, there is an ever-increasing impact of the system that came from USA, where only one type of ball is... read more

Aleksej Pokuševski was born on 26. December 2001. in Novi Sad, Serbia. He is one of the most talented player... read more

Two great games in U15 Belgrade League. Red Star hosted Partizan on Saturday in their hall on Železnik, where they... read more

New U17 Triglav KLS season is ahead of us. Best teams from U17 category in Serbia will take a part... read more

The new season of the Basketball League of Serbia (KLS) began this weekend. The league is never younger, which is... read more

Last year our national team at the European championship in Podgorica took 3rd place behind the NT of France (1st... read more

The new "Sportlight On" section on the SerbiaHoop site deals with scouting and analysis of the most current and most... read more