Aleksej Pokuševski was born on 26. December 2001. in Novi Sad, Serbia. He is one of the most talented player in his generation in whole Europe. Aleksej started playing basketball in local club BC Kadet in Novi Sad. At the age of 13 he decided to leave his hometown and move to Athens to sign for a Euroleague gigant, Olympiacos. From the start Aleksej showed his uniqe talent and skills and step by step he become a Olympiacos’s biggest hope for the future. He already had chance to debuted for the senior team and next year when he turn 18 years old he will sign a professional contract with Olympiacos and achieve his dream. We had chance to talk with Aleksej about his beginnings, his busy summer and his ambitions in the future.

Since you were 13 years old you have been living in Athens, how did you adapt at the beginning and who helped you the most to adjust?

“In the beginning it was a bit difficult, like every beginning, but the club was very nice to me, especially my teammates and coaching staff. The big credit for that goes to the director of the academy Nikos Kerameas who is the most deserving that I got here, along with coach Janis Hristantopulos. Of course my entire family was involved in everything and without them, none of this would be possible”.

This summer, you had the opportunity for the first time to be a part of Serbia NT at the U17 World Championship, what are your impressions and how much did it mean to you that you were part of that team?

“I wanted to put on Serbian jersey as soon as possible and to feel what is like to represent your country. It was great experience for sure and something completely different from the club”.

In the middle of August you participated in the NBA BWB camp in Belgrade, what are your impressions from the camp?

“Impressions are phenomenal, extremely quality time with excellent teammates and top coaches and people from the world of basketball, I am very happy to be part of it. I would especially like to point out the work and the relationship with Gregg Popovich, and his suggestions and compliments means a lot to me”.

A long and busy summer for you with a lot of basketball events. Have you managed to recover and prepare for the new season?

“True, this summer, literally I did not have a break, after the national team, I continued with individual work in Belgrade to be ready for NBA BWB camp and start of training camp with Olympiacos, where I joined the first team on the request of the new coach David Blatt. After the training camp I continued to practice with the first team and at the same time I’m playing for junior team. I am restless but I’m ready to respond to all the expectations of the coach and the club”.

What is the feeling practicing and playing with the Olympiacos senior team and sharing the court with the players such as Spanulis and Printezis?

“The feeling is phenomenal, I feel like I’m in the second galaxy in comparision with everything before that. Spanulis and Printezis are something special, on and off the court. With them each player has a different, special relationship. When I play with Spanulis on the court the pressure and concentrations are on a highest level, while Printezis is the opposite, concentration is there but I play more relaxed”.

Who is helping you the most from the first team?

“I can’t pick only one name because they are all very good to me and everyone is trying to help, of course most of all I communicate with Nikola (Milutinov) because we are from the same country and same city”.

Do you have basketball models and whose game do you like the most?

“I mostly liked to watch Kobe Bryant while he was playing, and now I’m following a lot of players of my heights and constitutions, mostly from the NBA, and I’m trying to take from everyone something that I like and adjust to myself”.

How would you describe yourself and your game? Which position fits you the most?

“I think that I am the most productive in transition and that’s what I like to play. When it comes to the positioning game, it’s fits me the most to play outside, although I am not stranger to sometimes get down on the low post and creates from there”.

In February, ANGT qualifying tournament in Belgrade is expects you. How do you evaluate your team’s chances of placing to the final tournament in Vitoria, Spain?

“Olympiacos compose his youth categories so there is not only one generation per team, so even now our junior team has only four players 2001 born,  everyone else is 2002 born so I could not figure out which result we could achieve, in any case I would be happy to be competitive in all matches and achieve a result at least as last season”.

What are your plans and wishes in the future?

“All current plans and wishes are related to Olympiacos and to start playing for the first team as soon as possible, for now everything is going according to the plan and I am very satisfied with the current situation and status”.

Thanks for the interview, we wish you all the best in your career.

“Thank you for inviting me and I wish you a lot of succes with your work”. 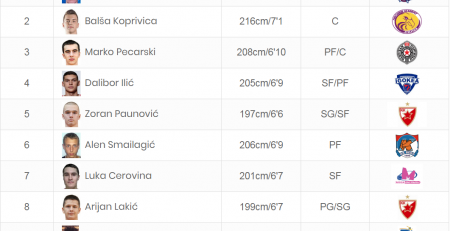 Pitanja i sugestije - Forum - Ser …by Guest6 months ago