#1 prospect of this generation  is Nikola Radovanović. Nikola is very talented 6’7 lefty forward from KK Budućnost Bijeljina. His body is still developing and he has a thin frame, but wide shoulders that suggest that he can add considerable weight with no problem in the future. Already played some senior minutes in his club. Tristan Vukčević is #2 prospect on the list. With 6’10 has tremendous size, length and long wingspan. Super agile for his size, long strides in transition. Needs to improve his footwork and understanding the game. Dejan Pavlović is 6’3 combo guard that can play both ways equally good. Explosive and quick player,  with good body strength. Plays hard on the defensive end. Aggressive on ball. Gets many steals . Doesn’t really have PG organizing skills. Drives to the basket only on straight lines. Matija Belić is 6’6 forward who mostly relies on his strength but also had good basketball IQ. He loves to play through contact and has the frame to absorb it when going to the rim. Can knock down shoots from mid range and from 3PT line too. This season he play against older competition, and he was dominated. He also got chance to play on senior level and gain priceless experience for his age. Srđan Popović is probably the most complete player in this generation. Basketball skills are on high level. Great ball handler, passer and shooter. Also he is big competitor and has great leadership quallity. His body is prety much developed at this point and that could be a problem in future, because he is undersized in height at 6’0, but he compensate it with great physicality, athleticism, and aggression. Marko Marković and Stefan Dabović are towers of this generation, both standing at 6’10 at the moment and looks like they still didn’t finish with growing, especially Marković. Ognjen Razić is 6’5 SG/SF who plays for KK Polet. He is good athlete with great run and jump ability. Good slashing ability, excels when driving to the basket.  Promising as a shooter. This season played U17 Triglav KLS as two year younger than competition and had solid role. Igor Vidačić is one of the most talented players in this generation. He has laid back personality and sometimes he looks uninterested on the court, but it’s incredible how he play with ease. Around 6’3 at the moment,  has thin body  but he is still in early stage of development, weught will come over the years. Still undefined position. Has solid court vision and good IQ for PG, but also can be effective shooting coming out of sceens as SG. Marko Mihailović is 6’5 SG from KK Loznica. Very talented and skilled player. Has a nice feel for the game, but still has lot of room for improvement. Didn’t have proper competition this year played lower league in his region.

Dino Bocevski is son of former basketball player Dusan Bocevski. From very young age Dino went from home and come to Stella Azzura basketball academy. He is late-bloomer physically, his body is still in development phase and that is why he still can’t have bigger impact on the game against quicker and stronger opponents. Has a nice feel for the game and good hands and touch around the basket. Needs to keep working on lateral movement.

Danilo Radulović is one of the most athletic players from this generation. He plays for Igokea,he came this season from KK Sloboda Novi Grad. Standing around 6’6 , can play both forward position. Runs the floor well with great agility. Quick leaper – light on his feet. Has ability to defend multiple positions. Good rebounder. Needs to improve offensive skil set.

Đorđe Miličić is 6’5 guard from KK Sloga Elite. Already has great size for the guard, and still didn’t finish with growing. Can play bout guard position equally good. His biggest strength is great court vision.Highly unselfish. Sees the floor well and very willing passer, always plays with his head up and finding his open teammates. Great rebounder on both ends of the floor. Needs to work on his shoot, he is not a treat from outside. Also has problems finishing through contact and in traffic.

Danilo Labović is 6’2 PG from Foka. He is pass first PG. Vey good court vision, passing ability, and understanding of the game. High IQ. Plays well within the offense, doesn’t force his scoring or try to do too much, he keeps it simply.  Athleticism isn’t his strong side, he is not to quickest and fastest guy on the floor but use his body well while he is driving and going to the rim. Needs to work on shot consistency, especially his mechanics and foot positioning .

Vuk Bošković is brother of Serbian NT volleyball player, Tijana Boskovic. Versatile player , standing around 6’5, who can play from point guard to small forward. Has a chubby body, but he already lost a lot of pounds this season when he came to Igokea from KK Hea Bileca and he is late-bloomer so when he grow couple more inches shouldn’t be a problem to get his body in shape.Great offensive skill set. Has great awareness and reads the game well. Good ball handling and passing ability. Can attack from the perimeter and has an ability to finish low post plays. Defensively,  lacks speed and lateral quickness.

Marko Vasiljević is 6’2 SG from KK Sumadija. His main weapon is 1on1 game. He is good ball handler with a great change of pace dribble, also does a great job of changing directions while driving to basket. When he goes to the basket, he is adept at using his body to shield himself from bigger defenders and finish through contact. Can finish on multiple ways, using floaters, lay ups.  Has nice touch around the basket. Very good shooter, can score off the dribble with ease. Does not have ideal size at 6-2 or length for SG position, and he is just average athlete. 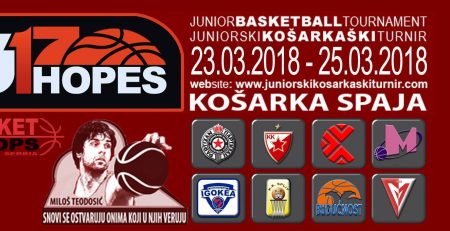