Tomorrow begins FIBA U18 European Championsip. The best 16 national teams from Europe will compete for the title in the Greek city Volos, between July 27th and August 4th. National team of Serbia comes to defend the title won by the last year’s generation on the EC in Latvia.

Our country in the U18 category has had a lot of success in the past. It should be noted that we won this trophy twice in a row, and from the independence of the country until today, NT of U18Serbia took 4 gold, 2 silver and 1 bronze medal, also U18Serbia took one more medal on the Summer Youth Olympics 2010 in Singapore.

What can the new generation achieve at this championship remains to be seen in the next 9 days.

SCHEDULE IN GROUP A 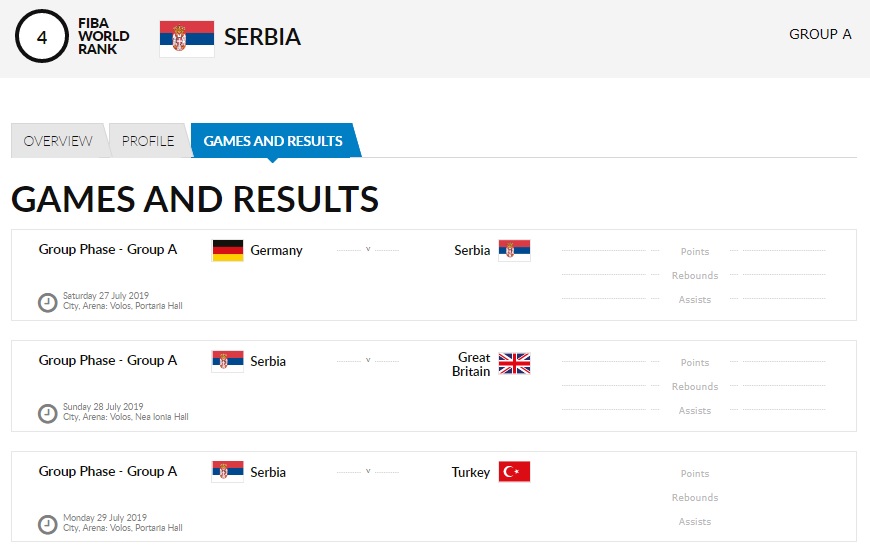 All games from the tournament will be streamed live on the FIBA YT channel https://www.youtube.com/user/FIBAWorld

NT of Serbia comes with 7 players who represented this generation at last year FIBA U17 World Championship 2018 in Argentina, where they took the 10th place. The five new players who joined the national team are:

Marko Andric (2002-PG-186cm) who had a great season in the U17 Mega Bemax team with which he won the Triglav KLS league, also he played excellent games in the U19 Mega Bemax, with which he reached the second position at this year’s U18 ANGT tour.

Nikola Manojlovic (2002-SG / SF-200cm) is one of the most talented cadet players of the Crvena Zvezda and one of the leaders of the U16 European Championship 2018. In Triglav KLS league, Nikola was the best scorer and assistant in the Crvena Zvezda team. This season he had a chance to compete in the junior RODA JLS league, where he was the sixth, seventh player in the rotation.

Djordje Djordjevic (2001-SG-196cm) is another new player in this team. The guy who played for Dynamic in the Roda JLS league last season. He was one of the leaders, a good shooter with solid numbers from the distance. It remains to see what his role will be in the team and how much space he will get.

Filip Skobalj (2002-PF / SF-201cm) this season had the opportunity to compete in the senior in the PRO A League (Germany) with Rostock Seawolves, where he reached the ¼ final of the league. He also played a good games in Bayern Munich team for which he played at the U18 ANGT.

Vukasin Masic (2001-PG / SG-195cm) didn’t have such a great games in U19 the ABA league, while in the Junior Roda JLS championship he played at a high level with an incredibly good percentage of the shot by 3 points, around 52% .  What will be his role is this team and how much time he will spend on the court remains to be seen.

Other players who will represent Serbia NT on FIBA U18 European championship are:

Djordje Pazin (2001-SF/SF-201cm) is certainly one of the leaders of this team. As we expected he had a great season in the Roda JLS league. This season he did not get a chance to play in the KLS league although he played 9 games for the 2017/2018 season for KK Mladost Zemun and  we all expected to watch Djordje on the senior scene but that was’t case.

Aleksandar Langovic (2001-PF/C-204cm) who should be one of the leaders of this team with Pazin. Langovic played KLS league for OKK Belgrade this season where he had solid games. Also he played a good games on the final of U18 ANGT in Vitoria. It is surely that he got the new experiences playing with seniors and that will mean a lot to him at this championship.

Aleksa Markovic (2001-SF / PF-199cm) in the debut season for Mega Bemax, Aleksa imposed himself as one of the main players of the team. He had a lot of problems with a shot, especially for three points. However, he played good games during all season.

Aleksej Pokusevski (2001-SF / PF-211cm) progressed physically a lot during the season, also made progress in his game. He had a chance to training with the first team of the Olympiacos. Another super talented guy in this generation.

Stevan Karapandzic (2001-PG-189cm) the guy who came from Partizan to Crvena Zvezda. He shared minutes on the PG position with Lazar Vasic. Obviously, he accepted the change and fit well into the system. A game with a lot of confidence and we hope it will have a successful championship.

Lazar Vasic (2001-PG-192cm) standard reliable Lazar Vasić. In all likelihood it should be the starting lineup of the national team on the PG position. Behind of him has a great season in U19 Crvena Zvezda team with which he won the championship.

Marko Pavicevic (2001-C/PF-207cm) had a solid season in the junior team of Crvena Zveda, where he played almost 18 minutes per game in average. He played fairly constant throughout the season. How much he will play in this team we will see. We do not have a classic center and that’s where this guy could find a chance to get more minutes on the court.

U18 Serbia NT starts the championship against the NT of U18Germany in which it is valid for favorites. One day later, the opponent will be the selection of U18Great Britain. The first place in the group could be solved in the 3rd match against unpleasant representation of U18Turkey.

I will allow myself to be pretentious and say that Serbia is definitely valid for the favorites of the group. If Serbia wins in all three games in the group, the next opponent for Serbia in 1/8 final will be the fourth-placed team from Group B (Russia, Lithuania, Italy, Montenegro).